McSally Speaks Up on Behalf of Overregulated Small Businesses

“I represent Arizona and over the last few years there have been significant challenges with those businesses in Nogales and Douglas—legitimate businesses, family-owned businesses that have had their accounts closed because of the Anti-Money Laundering and Bank Secrecy Act,” McSally said. “This has really hurt our community. While we’ve got to stop the cartels and the illegal cross-border money laundering, we need to make sure that these small businesses who are doing legitimate commerce are protected - that includes cross-border. At the request of Senator McCain and Senator Flake, the GAO did a study of this which was released last year. Each of your organizations responded to that by saying you were going to collaborate more with each other to make sure that these rules for anti-money laundering would be more tailored to make sure that it’s impacting obviously illegitimate activities without hurting and closing legitimate businesses. Can each of you give me an update on what you’ve done since the GAO report and what more there is to do because this is really impacting my state.”

Comptroller of the Currency Joseph M. Otting responded: “This particular group meets once a month collectively together and our staffs meet once a week, and we have a list of items that we’ve been focused on to try to bring clarity and we’re tailoring where it was appropriate. The big lever I would say to that would be later this year we plan to introduce the examination manual and that I think we’re looking more to move toward a risk-based approach on that process, but I would assure you, Senator, that it has our attention not only from the standpoint of the way of where we execute on AMLBSA today but what the future could look like and how technology could play a role in that.” 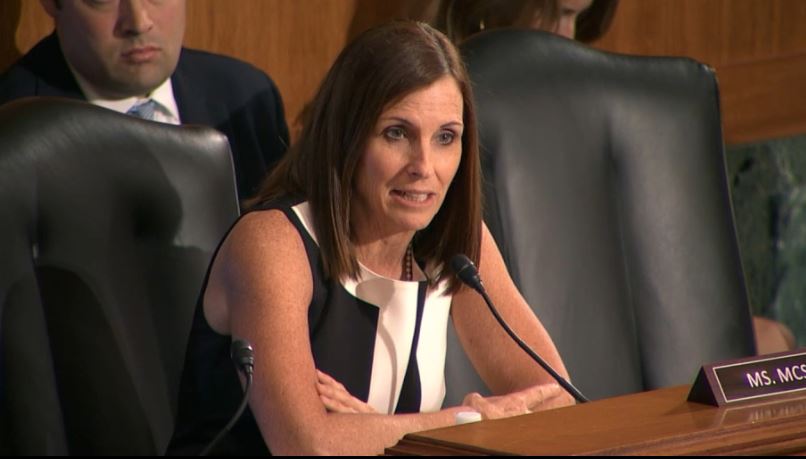 McSally followed up by asking for a specific timeline. When the comptroller could not give one,  McSally asked for the comptroller’s office to stay in touch with her office.